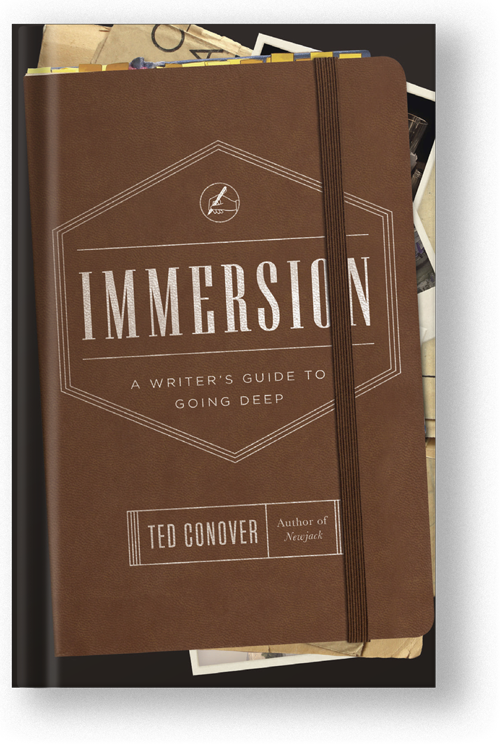 A Writer's Guide to Going Deep

From the book jacket:

Over three and a half decades, Ted Conover has ridden the rails with hoboes, crossed the border with Mexican immigrants, guarded prisoners in Sing Sing, and inspected meat for the USDA. His books and articles chronicling these experiences, including the award-winning Newjack: Guarding Sing Sing, have made him one of the premier practitioners of immersion reporting.

In immersion reporting—a literary cousin to ethnography, travel writing, and memoir—the writer fully steps into a new world or culture, participating in its trials, rites, and rituals as a member of the group. The end results of these firsthand experiences are familiar to us from bestsellers such as Nickel and Dimed and Behind the Beautiful Forevers. But in a world of wary strangers, where does one begin?

Conover distills decades of knowledge into an accessible resource aimed at writers of all levels. He covers how to “get into” a community, how to conduct oneself once inside, and how to shape and structure the stories that emerge. Conover is also forthright about the ethics and consequences of immersion reporting, preparing writers for the surprises that often surface when their piece becomes public. Throughout, Conover shares anecdotes from his own experiences as well as from other well-known writers in this genre, including Alex Kotlowitz, Anne Fadiman, and Sebastian Junger. It’s a deep-in-the-trenches book that all aspiring immersion writers should have in hand as they take that first leap into another world.

“Ted Conover was one of three or four authors I openly emulated when I was trying to learn the craft of writing. The worlds he immersed himself in were raw and desperate and dangerous and exactly the kinds of topics that I, myself, wanted to write about. I only wish he had written this book decades ago so that I would have had a little more guidance. Conover is a wonderful, kind, thoughtful teacher, and this book allows us all the chance to experience being his student for a little while. What a pleasure.”

Author, Tribe: On Homecoming and Belonging and War

“A vital, engrossing guide that is, in essence, an intimate conversation with a master of the form. This book is absolutely essential for writers of creative nonfiction, and a fascinating look inside the process for any reader.”

Author, Rin Tin Tin: The Life and the Legend and The Orchid Thief

“Immersion is a tricky business, and there’s clearly a need for savvy guidance from a wise, experienced practitioner. Who better than Ted Conover? With five immersion books to his credit and articles published in the country’s most prestigious magazines, he’s one of the world’s most accomplished immersion journalists.”

From Chapter 3, “Once Inside”:

A writer came up to me recently after I gave a talk and asked, “When you do these immersions, can you be yourself? ” Yes, I said. Yes, because who can you be besides yourself? I’d venture that fairly few people, even the most honest and forthright, present themselves exactly the same to everyone they meet during the day. I am somebody a little different to each of them. To my daughter, I’m Daddy. To some of my students, I’m “Professor”; to others, I’m “Ted.” To strangers emailing me for the first time, I’m sometimes “Mr. Conover.” To the policeman pulling me over for running a stop sign, I might be “Sir,” even if the respectful address is a prelude to giving me a ticket. I speak differently to my mother than to a cocktail waitress. And each of them, in turn, sees a different person when they look at me.

Are we “acting” when we speak differently to different people? The idea of inhabiting different roles as we pass through life was certainly familiar to William Shakespeare. His famous “all the world’s a stage” monologue considers how our roles in life’s drama change as we age: we go from helpless infant to whining schoolboy, then lover, then soldier, then smug and vain and, finally, incapacitated and helpless again.

The sociologist Erving Goffman applied the theater metaphor to our daily existence in his seminal book, The Presentation of Self in Everyday Life. Not only do we act out roles as we move through life, he suggested, but often we choose our stage, our props, and our costumes. We strive to make different impressions on different people and present ourselves to best advantage in different settings, all the while aware that others are taking our measure. Each person’s performance is her own, of course, but its contexts are situations with rules and expectations that we’ve all agreed upon: a classroom, a doctor’s office, a sporting event, a dinner party, all come with implicit scripts, ways we’re supposed to behave. Typically, the players are invested in having a successful performance, in maintaining decorum; he quotes Simone de Beauvoir on the crisis that ensues when accidents knock askew a mask: “Wine is spilled on her dress, a cigarette burns it; this marks the disappearance of the luxurious and festive creature who bore herself with smiling pride in the ballroom.”

When a researcher asks herself, Will I be able to pass?, she can thus be understood to be worrying about her incomplete knowledge of the rules and expectations of a particular drama. Preparation can be a partial cure, but since real life requires extemporaneous performance, it’s not enough.

So back to the question, Can I be myself? A better answer is probably, It’s best if you are. Because it’s difficult to be somebody you are not, especially over the long term. It’s difficult to lie, especially to lie a lot, and not get caught at it. It’s difficult to establish rapport, I think, if you do not exude a sense of authenticity, of feeling comfortable in your skin. When I am living like somebody else for a while, which is my version of undercover, I try to fit in not by adding false information about myself (like a fake backstory, which I’ll need to remember and which I might be tempted to elaborate on in a weak moment), but rather by subtracting—by not mentioning facts about myself which are inconvenient, which could give me away. It’s safer and to me it feels better.

For example: as a new correction officer, why shouldn’t I tell my colleagues that I’m married and have young kids? Doing so might help to explain why I look tired, why I’m not interested in working double shifts. Further, it might prompt fellow officers to tell me a bit about their families, and that’s all for the good. The same when I worked as a federal meat inspector in Schuyler, Nebraska. People were curious when I showed up in town solo, and those I became friendly with would ask about why I’d left the East Coast. My answers were all true: I grew up in Colorado, and had been missing this part of the country. You can get enough of New York City. I got tired of paying a small fortune for a small apartment. My son went off to college and I wasn’t tied to home anymore. My wife said she didn’t mind; I’ll probably see her before long.

Where it gets more complicated is when you meet somebody you like and start getting to know each other better. The meat inspector who trained me, Stan, knew I hadn’t qualified for the job by having experience, as he had, and deduced that I must have gone to college, the other way to get an inspector job. He asked me that very question one day on the “heads” line, during the five- or six-second pause we had between cutting into the giant skinned cow heads that passed in front of us, dripping blood as they dangled from hooks.

“Yeah, I went to college,” I told him. As the next pause in our labor arrived, he asked the follow-up question: “So where’d you go?”

Q & A with Columbia Journalism Review

During a career that’s spanned three and a half decades, Ted Conover has guarded hardened criminals in Sing Sing, snuck across the US border with Mexican immigrants, inspected poultry as a USDA employee, and roamed the nation as a railroad hobo–all in pursuit of his next big story.